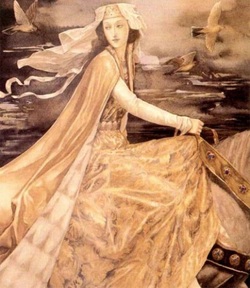 If you're a FitzGerald from the Limerick area, the process may be a lot easier. Lord Desmond, the third Earl of Desmond, married the Tuatha De Danann goddess, Aine. Their son, Gerald, fourth Earl of Desmond, is still seen riding from Lough Gur every seven years when the lake is dry.
Posted by Irish Gypsy at 2:55 AM 1 comment:

The banshee may also appear in a variety of other forms, such as that of a hooded crow, stoat, hare and weasel - animals associated in Ireland with witchcraft.
Posted by Irish Gypsy at 2:13 AM No comments:

Faerie are human in their appearance with an abundance of magickal powers. Their origins were purposely veiled over time by folklore that claims the Fae are both dead, a daemon or some kind of species independent of mere humans or sweet angels. Folklorists believe they were a conquered race who now disguise themselves and hide in plain sight. The enigma of the Fae exists today in various forms, though don't be deceived, these are not sweet angelic creatures. They are warriors with the ability to faery-glamour their prey into submission. Clever Fae, both male and female use their charm to become invisible when necessary or change their form to look as they please. They are cunning shape-shifters.
Another view held that the faeries were an intelligent species, distinct from humans and angels. In alchemy in particular they were regarded as elementals, such as gnomes and sylphs, as described by Paracelsus. This is uncommon in folklore, but accounts describing the faeries as "spirits of the air" are popular.
Fae are known for their malice to cows, sheep and other beasts who have succumbed to the healthy appetites of the faeries. Cold iron is poison to fairies, charms of rowan and herbs work if worn outside your clothes and a protection talisman may let you pass freely.
Reverend Robert Kirk, Minister of the Parish of Aberfoyle, Stirling, Scotland, wrote in 1691:
"These Siths or Fairies they call Sleagh Maith or the Good People...are said to be of middle nature between Man and Angel, as were Daemons thought to be of old; of intelligent fluidous Spirits, and light changeable bodies (lyke those called Astral) somewhat of the nature of a condensed cloud, and best seen in twilight. These bodies be so pliable through the sublety of Spirits that agitate them, that they can make them appear or disappear at pleasure." ~The Secret Commonwealth of Elves, Fauns and Fairies~
Our culture depicts the Fae as young, sometimes winged, humanoids of small stature. Though originally artists and eye witnesses depicted the Fae much differently. A tall, radiantly statuesque being were written in journals for centuries.Wings, were added in Victorian art, but are rare in folklore. Most believed faeries flew with magick, and on the backs of insects and birds. Many artists today show faeries with insect wings or butterfly wings. 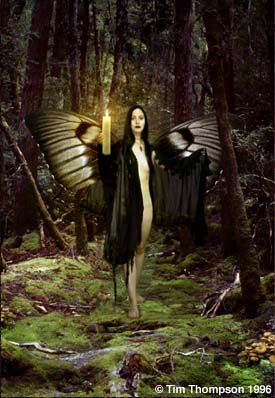